Music came all natural to Hanna Fearns: her mom’s mother was a performance artist touring the world with German folk songs, and in her dad’s family from Liverpool singing and performing was a natural ritual, much like the 5o’clock tea. As a child Hanna learned to play the piano, soon followed by guitar lessons. 15 years old, Hanna went on to tramp her way through Europe, making a living as a street-musician and wowing the crowd in bars with Joni Mitchell and Bob Dylan songs.

Eventually, after having been on a Conjunto and TexMex festival in San Antonio, she formed her first Country band Easy Country, covering songs from Gram Parsons, Emmylou Harris, Hank Williams, Patsy Cline, Maria McKee and Johnny Cash. Once they stared working on more own material the band ultimately changed its name into fearns. Americana, Alternative Country and Indirock were stylistic references. The band performed several support-shows e.g. for Rich Hopkins, Heather Miles and Hazeldine, as well as club tours through Germany.

2008 Hanna’s solo project began to take shape and after finding a suitable producer in Hubl Greiner, member of the Avantgarde-rock-ledgend The Blech, things started happening: eleven songs, a 14-member band with an idiosyncratic instrumentation (including hammer dulcimer, euphonium, tres and bansuri) provide for the unmistakable sound leading through “Sentimental Bones”. On several occasions in 2013 she performed live, sometimes solo, sometimes with her Cologne-based band Tiny Hunters, or with Textor&Renz (Kinderzimmerproductions)  in the course of the pre-release tour „Sweet as November“, and with Ken Stringfellow (Posies REM Big Star).

After several band projects, Hanna Fearns’ solo-debut Sentimental Bones is now released by Bremen-based label Songs and Whispers: a union of Alternative Country and classical Singer-Songwriter-Folk into a genre Hanna herself describes as “Sofa Country”. Trifling her music into the “any old Country-drawer” would be a hasty mistake: A soupcon of Tex-Mex and Jazz, rhythms evoking Bossa Nova, Pop and even Reggae show her unreserved and yet respectful way of interpreting the 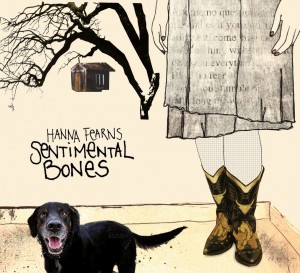 Nashville legacy. Her songs don’t force themselves on you, but if you pay attention, you run the risk of being captured, whether on a cozy couch at home, or at the counter of a dirty bar in the Sonoran desert.

Sentimental Bones is not only the skillful dissection of feelings, but also a musical road trip into rough landscapes, ruled by melancholy („You stole my crown“, „Die alone“, „9mm“), or pissed off grievousness („I spit into our face“,„Wasteland”), yet also comforting warmth and promising rays of light („Dream of Me“,„Slaves of opportunity”).

These are love songs about failure, loss and disappointment, but where the pain hits hard begins quest for autonomy, the desire to strike off fetters of dependencies and repurpose the pain. This fierce and emancipator aspect is also mirrored in Hanna’s warm and clear voice: Even in the most intimate and tender moments she is never tempted to slip into girlish coquetry, but instead remains accessible and authentic – to the bones.

Sentimental Bones was produced by Hubl Greiner, former head of the internationally-renowned German Avantgarde-Rock band The Blech. A 14-member band, an idiosyncratic instrumentation including hammer dulcimer, euphonium, tres and bansuri provide for the unmistakable sound leading through “Sentimental Bones”.